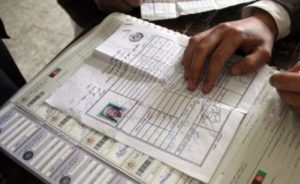 The Independent Elections Commission (IEC) has extended the first phase of voter registration by one month, the commission announced Thursday.

The first phase involving provincial capitals began on April 14 and is scheduled to end on May 13.

“The voter registration has been extended to make way for the people to use their this legal right and register so they could be able to vote in upcoming elections,” said Abdul Badi Sayad, chairman of the IEC.

According IEC, so far more than 1.5 million voters registered for the parliamentary and district elections which is due to be held on October 20. In between more than 413,000 are female voters, 35,000 Kochi voters and 147 Sikh voters.

In a message to probable candidates of the election, Mr. Sayad said: “premature election campaign is not allowed and the candidates should refrain from doing that. In case of violation, their candidacy will be terminated.”

Insecurity is considered to be a major challenge in front of the process as the election commission said that apart from 44 polling stations which have been closed due to security threats, 87 voter registration centers not even registered a voter yet.