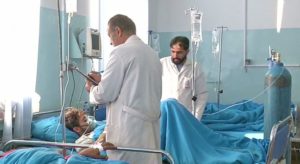 The Ministry of Public Health (MoPH) recent report indicates that more than 200,000 Afghans are losing their lives due to various diseases, terrorist attacks and traffic incidents in the country.

According to MoPH, chronic and infectious diseases claim lives of 130,000 Afghans, followed by terror and traffic incidents that cause death to 70,000 Afghans each year.

Heart illness, high blood pressure, tuberculosis, diabetes and pregnancy diseases have been recorded as the most threatening diseases in the country that people mostly lack better healthcare services and suffer from environmental and security issues.

Attaullah Sayedzai, the general head of health information at MoPH said that people die mostly in rural areas, where it face conflict and many healthcare issues compared to the cities where the hospitals have well educated personnel and access to healthcare services.

In addition, the economic problems also causing people to turn into home treatment and put their lives in danger.

“People have low income, and the facilities are less for the patients,” said Abdul Qadir Ghafoori, a doctor.

Among chronic diseases, tuberculosis is considered to be one of the deadliest in the country, as according to World Health Organization, the burden of tuberculosis is increasing in Afghanistan, with an estimated 61, 000 people infected annually.