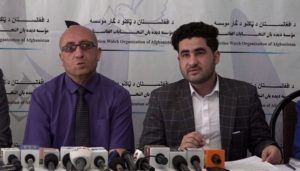 An election watchdog on Tuesday warned of possible delay in the upcoming parliamentary and district council elections.

Habibullah Shinwari, a member of the Election Watch Organization of Afghanistan said that the election will not be held at the scheduled time (October this year).

According to the watchdog, lack of proper working mechanism in the election commission (IEC) has caused the eligible Afghan refugees in neighboring countries and citizens who are employed in abroad as well as prisoners to be deprived of voting in the election.

“Due to lack of a proper mechanism of the commission, these groups possible get deprived of voting,” Shinwari said.

The organization, meanwhile, said that due to the negligence of the security force and IEC, 700 voter registration centers have been closed in 38 districts.

Mazullah Dawlati, a member of IEC however, said that they have considered new methods in voter registration process in order to register the security forces –engaged in battle – and prisoners via mobile teams.

Following his appointment as senior deputy minister of Interior, Akhtar Ibrahimi said that he will prioritize ensuring the security of the election.

“Holding election is our priority and we will make efforts to ensure its security,” he said.

Considering the government’s position as “political” and “unprofessional” in the electoral reform process, Shah Mahmud Mal, another member of Election Watch Organization said: “There is no common consensus for election in the government and this issue could cause the election not be held on the scheduled time.”

This comes as more than 2.3 million people have been registered including 1.597 male and 669,000 female voters for the parliamentary and district council elections so far.