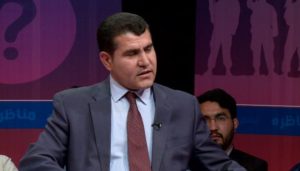 The deputy of Independent Election Commission (IEC), Maozullah Dawlati says President has pressed and threatened the commission’s members to resign from their positions.

Speaking at a debate program in Ariananews TV, Dawlati revealed the intervention of President Ghani in election commission’s affairs.

“President Ghani in presence of U.S. ambassador and UN envoy for Afghanistan has threatened those IEC members who were opposed to attaching stickers on copy of ID cards,” Dawlati said.

“When President threatens IEC members to resign, it can be a national conspiracy while he may also be one of the Presidential candidates at the upcoming elections,” Manwai added.

However, the President’s deputy spokesman, Shah Hussain Murtazawi stated that attaching stickers on copy of ID cards was suggested by the Chief Executive and President Ghani has not threatened anyone to resign.

He emphasized that President Ghani called for a clear scheme from the election commission but has received nothing.

This comes as recently the IEC aimed concerning over the attachment of sticker to paper identity cards, said that voters can use the copy of National ID cards for registration process.