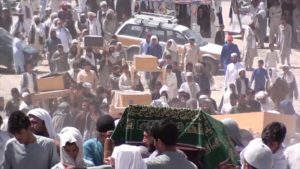 Afghan forces have killed nine people and injured eight others including a child and a women during a military operation in eastern Nangarhar province, officials confirmed Tuesday.

According to officials, the incident has taken place by mistake in Chino village in Dawlatziyo area of Chaparhar district late on Monday night as Afghan forces were conducting an operation against the Islamic State militants.

Provincial governor Hayatullah Hayat said the incident has happened due to a misunderstanding between Afghan forces and local police in the area.

“I’m quite sure that the incident has taken place due to a misunderstanding. The main target of the Afghan forces were Daesh insurgents and other anti-government elements in the area. Unfortunately, nine people including a senior local police commander and a number of his family members have been killed during the operation,” Hayat said.

Eyewitnesses say a local police commander with two of his sons and a number of relatives of the Senate Chairman Fazel Hadi Muslimyar are among those killed in the operation.

Reports suggest that Afghan forces have raided a house where gunfire had been coming from.

The government has appointed a high level delegation to conduct an investigation into the incident.