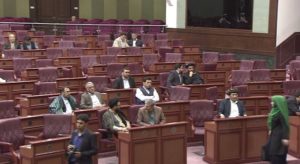 A number of Afghan lawmakers on Monday, criticized the government over failure to form a transparent collection system for the revenues earned via 10 percent telecom tax on mobile phone users, saying the amount of money being stolen by certain individuals.

The members of Wolesi Jirga or Lower House of the parliament said some elements within the government were trying to halt the plan of activating a transparent collection system.

“The issue of having [collection] system of has been started by the Ministry of telecommunication three years ago, but the issue is politicized and some individuals don’t want this system to be activated because the tax money being shared to many people,” said Qais Hassan, chairman of parliament’s Telecommunication and Transportation Commission.

Meanwhile, MP Makhdom Abdal Mohammadi said that it has been six months since the promises had been made to activate the system for collection of telecom tax, but the plan has not been implemented so far.

The Minister of Telecommunication, Shahzad Gul Aroubi, however, said that the amount of money earned via telecom tax is being transferred to the central bank. “No authority has access to telecom tax.  We are making efforts to create a transparent collection system and some companies are volunteers in this regard,” he said.

This criticism came after the house summoned the telecommunication minister Aroubi over the issue.