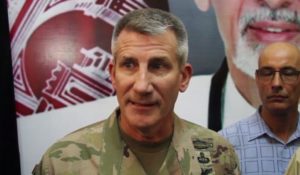 The United States is ready to join direct negotiations with the Taliban in an effort to end the 17 year-long war in Afghanistan, the top U.S. commander General John Nicholson, said on Monday.

Nicholson, who leads the NATO-led Resolute Support mission said the United States recognised it had a key role to play.

“Our Secretary of State, Mr (Mike) Pompeo, has said that we, the United States, are ready to talk to the Taliban and discuss the role of international forces,” he said.

“We hope that they realise this and that this will help to move the peace process forward.”

Nicholson met with Afghan defense minister Tariq Shah Bahrami and a number of foreign countries’ envoys in southern Kandahar province, where he also said: “Afghanistan and the peace process have the strongest possible international support.”

“This is important for everyone to realize because the international community is with Afghanistan and will stay with Afghanistan, he said. “Hopefully in a peace process, but if not we are prepared to be with them in the fight as well.”

This comes the New York Times reported that U.S. President Trump’s administration had ordered diplomats to seek direct talks with the Taliban in a bid to jump-start negotiations.

With reporting by Reuters