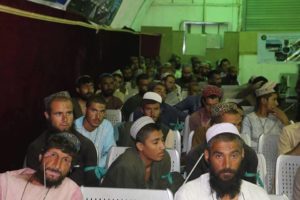 At least 58 people, including security personnel and civilians, were released from a Taliban prison in Helmand province, local officials said on Tuesday.

Maiwand 205 Corps in a press release said the prisoners were freed after a commando unit raided the prison late Monday night in Musa Qala district.

“Four soldiers, 15 Police officers, two doctors and 33 civilians were the prisoners who freed by security forces and four Taliban who were warden were arrested,” the press release added.

The Taliban did not immediately comment on the raid, but the insurgents are in control of the majority of the districts in Helmand, where they have increased their attacks against provincial officials and security forces.