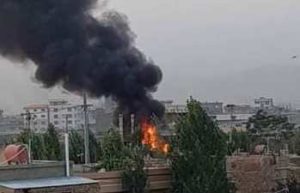 At least four people were killed and five others wounded after a suicide attacker targeted a convoy of the National Directorate of Security (NDS) in Kabul city early Thursday morning, police confirmed.

The attack took place at about 5am local time in Bagh-e-Daoud area in PD5 of Kabul city, a spokesman for Kabul police chief Hashmat Stanekzai said.

An official in the Health Ministry says several wounded people have been taken to Kabul hospitals for treatment.

The Taliban group in a statement claimed responsibility for the attack, saying the attack was carried out by a suicide car bombing on intelligence service employees.