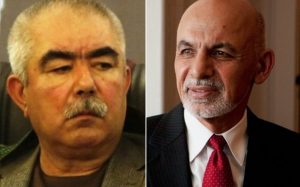 Sources close to Gen. Dostum have RFE/RL’s Afghanistan service that the meeting will likely take place during the day time today.

The source has not disclosed further information regarding the likely meeting and it is yet not clear on what issues the two leaders would hold talks.

However, Gen. Dostum had earlier said that he would hold talks President Ghani regarding the release of Nizamuddin Qaisari, the acting district police chief of Faryab’s Qaisar district.

A spokesman of Junbish Milli Party, Bashir Ahmad Tahyanj, had earlier said Gen. Dostum would step up efforts for the release of Commander Nizamuddin Qaisari after his return to Kabul.

Tahyanja further added that Commander Qaisari will soon be released from the detention facility of the Intelligence Directorate.

He said Commander Qaisari will be shifted to his accommodation after his release from the Intelligence Directorate’s detention facility where the First Vice President would be able to visit him.