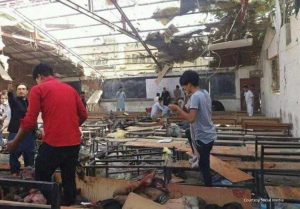 The death toll from today’s deadly suicide attack has climbed to at least 48 people, the Ministry of Public Health officials said.

The officials further added at least 67 people who have sustained injuries in the attack, have also been shifted to the hospitals for the treatment.

The incident took place this evening in the West of Kabul city in Dasht Barchi area after a suicide bomber targeted an education center.

The Ministry of Interior spokesman Najib Danish had earlier confirmed that an education center has been targeted in West of the city but did not elaborate further.

A source within the education center confirmed that the attack has taken place inside the educational center, targeting the students.

No individual or group has so far claimed responsibility behind the attack so far.

The Taliban group had earlier issued a statement confirming that the fighters of the group have no links with today’s attack in Dasht Barchi.

This comes as the anti-government armed militants have been attempting to expand their attacks in the key provinces and cities of the country during the recent months.