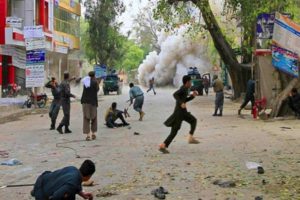 The last week massacre has resulted more than 250 Afghan troops and 100 civilians killed in all across Afghanistan, according to officials.

The Taliban group attacked Ghazni city during the last week, collapsed the military base of Allawoddin in Baghlan, Chinese base in Faryab and shot dead all of its surrounded soldiers.

Another deadly attack on an academic center in Kabul on Wednesday was also shocking for the Afghan people.

At least 65 people were killed and more than 70 wounded in the IS group attack on an education center in Kabul.

The Taliban attacks on two military base in Allawddin area of Baghlan province left 45 soldiers killed.

150 army soldiers were killed, wounded or captured in attack on Chinese base in Qaisar district of Faryab province which was sieged by the Taliban for one week.

In reaction to the statistics, the deputy spokesman of the Ministry of Defense, Muhammad Radmanish said, “You all have witnessed how the security forces fight until the last drop of their blood.”

In the meantime, there are rumors that Taliban militants have replaced in many parts of cities during the three day Eid ceasefire with the Afghan government and organized these bloody incidents.

However, the security officials have a different view on this issue.

“The reason of attacks on Ghazni province was not the weakness of Afghan forces. The Haqqani group, Alqaeda and another terrorist groups cooperated the Taliban to launch such attacks,” Najib Danish, spokesman of the interior ministry added.

Seventeen years into the war in Afghanistan, the longest war in US history, violence has never been worse as the number of Afghan civilians killed in the country’s long-running conflict hit a record high.