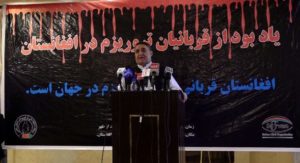 A number of political figures and civil society activists have urged mobilization of people against the actions of the terror groups in the country.

Criticizing the United Nations’ action regarding the recent insurgent attacks in the country, the politicians and civil society activists urged the government to avoid supplicated actions against the armed groups.

Addressing a commemoration ceremony held for the victims of terrorism in the country, Ahmad Sayed, a politician and commentator said that all the international entities in Afghanistan including UN only condemning the militant attacks in Afghanistan, instead of having actions to prevent such incidents.

“Wasn’t it your decision to work with us? Wasn’t it our decision to bring peace and stability? They [the government] should give response,” said Sayed Ali Kazemi, a member of the parliament.

Some participants including relatives of the victims of the recent attacks, meanwhile, reasoned the government’s war and peace policy behind the rise in casualties to civilians and military forces; referring to the government’s three months conditional ceasefire with the Taliban as an example in this regard.

“When I voted, expected to ensure my security; not be a witness of transferring our relatives’ dead bodies to home,” said a civil society activist Roshan Ghaznawi.

“The government at least address the demands of the people including maintaining their security,” said Mohammad Ali, a relative of the victims of the recent bombing at an educational center in Kabul’s Dasht-e-Barchi area which left dozens of people killed and wounded.