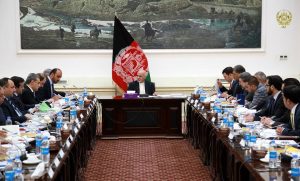 The Master Plan of Pul Alam cit, the provincial capital of central Logar province, was approved during a meeting of the Urban Development Council.

The Office of the President, ARG Palace, said the meeting of the Urban Development Council was organized on Monday evening and was chaired by President Mohammad Ashraf Ghani.

According to a statement released by ARG Palace, the Mayor of Pul Alam Ahmad Zaki presented the Master Plan of the city in the meeting and shared information regarding the current conditio of the city, different phases of the urban studies and its results, goals, and strategies.

According to ARG Palace, the participants of the meeting approved the Master Plan for Pul Alam city after detailed discussions.

President Ghani said the main point of the Master Plan is its implementation with the distribution of the land being a critical issue which will be resolved once the new law for the Municipalities is passed.

He emphasized on the finalization of the funds needed for the implementation of the Master Plan, insisting that the allocation of funds should be based on ‘rotation of money’ basis that should produce effective benefits and the limits of the personal land should also be made specific.