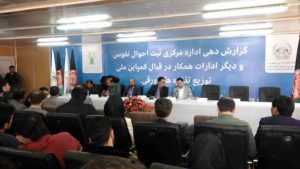 The population registration department of Afghanistan says more than five million paper ID cards were distributed in the past seven months.

“At least 42 cases of violation to the Attorney General were reported during the distribution of paper ID cards,” Hamayoun Mohtat, the chairman of population registration department said.

Addressing a press conference, Mohtat noted that the violations were identified through the delegation that were sent to the provinces and a number of individuals were introduced to the judicial institutions after reviewing the cases.

In the meantime, the Independent Election Commission (IEC) chairman Abdul Badi Sayyad declared that the information center Bank will separate the fake and ghost ID cards from the real cards.

“The registration was carried out in 33 provinces without Ghazni, it was cleaned up and we have created a duplicate to separate the valid votes from the invalid ones,” Sayad asserted.

At the same time, Police and the Army also ensured future cooperation for the Election Commission and the Population Register department.

“We have arrested those who made fake ID cards. At least 19 suspected were arrested with 1430 fake ID cards and were introduced to the Attorney General,” Abdul Jabar Pardeli, deputy of MoI for administrative affairs.

On the other hand, General Aziz Muhammad deputy of oppression department of defense ministry stated that the Afghan security forces are trying to provide the security of upcoming elections through launching operations.

While less than two months remained for holding the elections, the IEC has still failed to gain the trust of citizens and observing institutions.