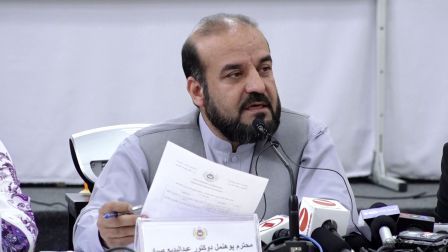 The Independent Election Commission (IEC) says serious efforts are underway to use the biometric system in the Election Day.

“We have made our efforts to use the biometric system in the Election Day and to recognize every voters that cannot vote for the second time,” Abdul Badi Sayad, the chairman of IEC said.

However, a number of parties claim that they have not negotiated regarding the biometric system with IEC officials and called for holding a tripartite meeting among the government, parties and the company which prepares the system’s technology.

“Our specific demand is holding a tripartite meeting among the government, parties and the company that every side can understand the details,” Muhammad Nateqi, a member of Afghanistan Wahdat-e Islami leadership said.

In the meantime, the Independent Electoral Complaint Commission (IECC) declares that the commission is not responsible for the delay of upcoming election, because the electoral bodies are ready to hold the election in its specified time.

“Anyone who is the main factor for the delay and crisis in the upcoming election should know that at least the Electoral Complaints Commission is comfortable with its conscience and those are responsible who are involved in the case,”

This comes as the chairman of IEC says holding election in 20 October is a red line and no one will be allowed to stop this process.