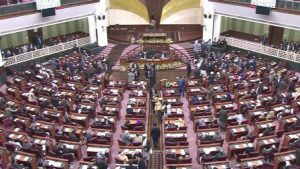 A number of Parliament Members at the Lower House said the United States was not honest in its commitments to end war in Afghanistan.

Afghan lawmakers reemphasized to review the Bilateral Security Agreement with U.S. to show how U.S. fulfilled its commitments to Afghanistan.

“The Lower House should not change its decision over reviewing the security pact with U.S. and the United States should respond to Afghan people about its performances,” Rahman Rahmani, representative of Balkh said.

The representative of Kabul, Allah Gul Mujahid also added, “We voted and collected signatures to review the security pact with U.S., it should be canceled if it is not in our interests.”

In the meantime, the chairman of Lower House, Abdul Rauf Ibrahimi noted that the internal security commission of Parliament is obliged to submit the result of their evaluations that we could take a decision.

Afghanistan and the US have signed a long-delayed agreement to allow international forces to stay in the country beyond 2014.