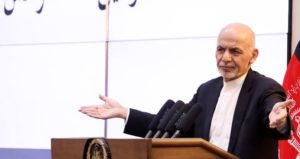 Addressing the 3rd Mayors National Conference, President Ashraf Ghani admitted that government has failed in implementation of urban plans for Kabul city, saying many of the plans only remain on paper.

“How much is the daily income of each of us? What does it mean? We have not created productive and industrial cities,” President said.

In Afghanistan, a country affected by longstanding conflict which has led to large numbers of internally displaced persons and returning refugees, cities play a key role as hubs for employment, especially youth, innovation and peace.

Indeed, the Afghan population is expected to double within the next 15 years with the urban population reaching 50% of the total population.

Ghani declared that lack of capacity, bad governance in municipalities, incomplete short term programs have created crisis for the city and citizenship in Afghanistan.

He also criticized the low quality of buildings in the cities.

“Dead colleagues, let’s admit that you were not successful. We should not hide our shortcomings and failure under the excuse of land grabbing,” Abdul Matin Beg, chairman of the Local Organs added.

Despite the volatile security situation in the country, Afghanistan is one of the few countries in the world that has taken systematic actions to comprehensively implement the fundamentals of urbanization.