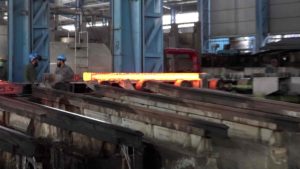 Government officials and businessmen laid the foundation stone for the construction of an Iron melting factory in Kabul on Tuesday which worth $20 million.

Khan Mohammad Wardak, the owner of the manufacturing factory said that the factory will begin operation next year.  “We have great capacity and can make major economic activities in the future,” he said.

The Iron melting factory is expected to create job opportunities to at least 2,000 people.

The first Deputy to CEO Khan Mohammad, meanwhile, said that a lot of challenges in front of investors in the country. But he said the government has taken major economic plans in this regard.

Following the matter, the Minister of Commerce and Industries Humayoun Rasa said that that rooms for investment are rising in the country.

“Our need is about 300 thousand tons of goods annually and we are hopeful of preventing 230-250 million equivalent products being imported in the country,” Rasa said.

“We must accept this truth that investment in Afghanistan needs courage and compassion,’ said Nargis Nehan, Acting Minister of Mines and Petroleum.