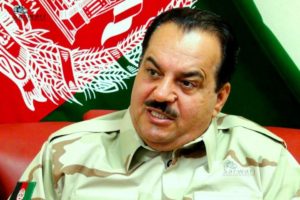 Three suspects have been arrested in connection with the apparent assassination of the parliamentary candidate, Abdul Jabar Qahraman, the Ministry of Interior said on Wednesday.

“Qahraman was among four people killed by the blast, another seven were wounded and three suspects have been arrested,” Wais Ahmad Barmak, the interior minister said.

Qahraman became the 10th election candidate to die ahead of Saturday’s polls when the blast tore through his campaign office.

“Abdul Jabar Qahraman had been meeting with supporters in his campaign office in the southern province of Helmand when a bomb hidden under a sofa exploded,” provincial governor spokesman Omar Zhwak added.

The Taliban quickly claimed responsibility for the attack in a statement posted online.

In the wake of the attack, President Ghani condemned the group, saying they will not undermine citizens’ faith in democracy.

“Such brutal acts of the terrorists and their supporters cannot weaken people’s trust in the peaceful and democratic processes,” said Ghani.

The attacks came as the Taliban warned teachers and students not to participate in the vote and not to allow schools to be used as polling centers.

The insurgents said in a statement that they will target Saturday’s elections, which they view as illegitimate, but that they do not want to harm civilians.