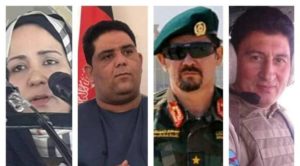 Defense Ministry Spokesman Javid Ghafoor said that the helicopter crashed after taking off from Anar Dara district due to “technical problem”.

Meanwhile, the Taliban militant group claimed that its militants brought it down, but local officials said the helicopter hit a mountain peak due to poor weather and overweight.

“The helicopter has hit the peak of a mountain and then caught on fire,” Shah Mahmoud Naimi, a member of Farah provincial council said.

In September, an army helicopter carrying weapons and ammunition burst into flames during an “emergency landing” in Farah, killing at least four people.