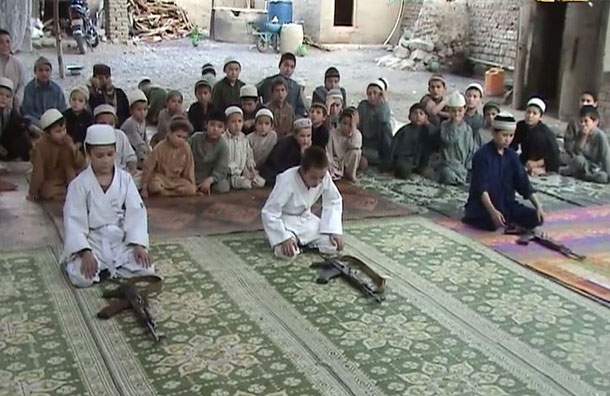 Human Rights Watch (HRW) says Taliban forces in Afghanistan have added scores of children to their ranks since mid-2015 in violation of the international prohibition on the use of child soldiers.

The rights group’s research shows that the Taliban have been training and deploying children for various military operations, including the production and planting of improvised explosive devices (IED).

In a report released on Wednesday, HRW writes that in Kundoz province, the Taliban have increasingly used madrasas, or Islamic religious schools, to provide military training to children between the ages of 13 and 17, many of whom have been deployed in combat.

“The Taliban’s apparent strategy to throw increasing numbers of children into battle is as cynical and cruel as it is unlawful,” said Patricia Gossman, senior Afghanistan researcher. “Afghan children should be at school and at home with their parents, not exploited as cannon fodder for the Taliban insurgency.”

Human Rights Watch interviewed relatives of 13 children recruited as Taliban soldiers over the past year, and verified these claims through interviews with civil society activists, political analysts, and the United Nations. Despite Taliban claims that they only enlist fighters who have achieved “mental and physical maturity,” and do not use “boys with no beards” in military operations, some of the children recruited from madrasas in Kunduz, Takhar, and Badakhshan provinces are 13 or younger. The Taliban have previously denied“the use of children and adolescents in Jihadic Operations,” but its deployment of individuals under the age of 18 violates international law applicable in Afghanistan and in cases involving children under 15 is a war crime.

Kunduz residents and analysts say that the increase in recruitment and deployment of child fighters coincided with the Taliban’s major offensive in northern Afghanistan that began in April 2015. Human Rights Watch interviews with activists and analysts indicate that the Taliban-run madrasas have been functioning in Kunduz, as well as other northern provinces, since at least 2012. As the Taliban made substantial inroads in 2013-2014, gaining ground in Kunduz’s Chahardara and Dasht-e Archi districts, they gained more influence over education in the province. Taliban commanders increasingly used madrasas not only for indoctrination, but also for military training of children. Previously, Taliban commanders sent boys selected for military training to North Waziristan in Pakistan, where despite Pakistan’s military operations, the Taliban operates freely in large swathes of territory. While such training still occurs, the Taliban has solidified its control over at least three districts in Kunduz and residents and analysts told Human Rights Watch that the group is carrying out more of the military training locally.

The Taliban recruit and train children in age-specific stages. Boys begin indoctrination as young as six years old, and continue to study religious subjects under Taliban teachers for up to seven years. According to relatives of boys recruited by the Taliban, by the time they are 13, Taliban-educated children have learned military skills including use of firearms, and the production and deployment of IEDs. Taliban teachers then introduce those trained child soldiers to specific Taliban groups in that district.

“The Taliban’s increasing use of children as soldiers only adds to the horrors of Afghanistan’s long conflict both for the children and their families,” Gossman said. “The Taliban should immediately stop recruiting children and release all children in their ranks, even those who claim to have joined willingly.”

Taliban Recruitment and Training of Children

The Taliban have recruited and used children as fighters since the 1990s, but Kunduz residents whose sons have been among those recruited, together with analysts who have monitored the recruitment drive, believe that recruitment increased in 2015 due to expanded Taliban operations against Afghan government forces. The establishment of training centers in madrasas in the Taliban’s expanded zone of control in Kunduz also led to increases in child soldier recruitment. Kunduz residents told Human Rights Watch that the Taliban had recruited and deployed more than 100 children from Chahardara district alone in 2015.

Because the Taliban begin the indoctrination of children from an early age, they are easily persuaded to fight. Relatives of child soldiers in Kunduz told Human Rights Watch that the Taliban target children because it is easy to convince them of the righteousness of jihad, and because they are at an age where they do not feel responsible for providing for a family and so are easily persuaded to take on dangerous tasks. In general, children are not recruited by force. However parents who have tried to retrieve their children are usually unable to do so because the Taliban claim that the boys are of age, or are committed to jihad regardless of their age.

The Taliban madrasas attract many poor families because the Taliban cover their expenses and provide food and clothing for the children. In some cases they offer cash to families for sending their boys to the madrasas. An expert on Kunduz told Human Rights Watch that traditionally, even before the Taliban established madrasas in these areas, rural and village families sent at least one son to the local madrasa because of the prestige associated with the status of becoming a mullah (someone educated in the basics of Islamic law). In the cases of child soldiers Human Rights Watch investigated, some boys attended the madrasas in the early morning hours and then attended government schools later in the day. Other boys who had been recruited attended the madrasas full time. For example, “Razeq,” (a pseudonym) 16, a resident of Chahardara district in Kunduz province, is a student in Class 6 at a government-run school, which he attends between 8 a.m. and noon every day. Between 5 a.m. and 8 a.m. he attends a madrasa controlled by Malawi Abdul Haq, a Taliban commander in the district. As of late 2015, the madrasa had about 80 students, most of them children between the ages of 13 and 17. All of them are vulnerable to recruitment.

According to some reports, children as young as 10 years old fought with Taliban forces in the battles that led to the Taliban’s temporary takeover of Kunduz. Leila Zerrougui, the UN special representative of the Secretary-General for children and armed conflict, told Al-Jazeera that “children between the ages of 10 and 15 were used by the Taliban and dozens of them were deployed” during the fighting in Kunduz in September and October 2015.

International humanitarian law, or the laws of war, prohibits the recruitment or use of children under 15 by parties to a conflict. “Conscripting or enlisting children under the age of fifteen years into armed forces or groups or using them to participate actively in hostilities” is a war crime under the Rome Statute of the International Criminal Court (ICC), to which Afghanistan belongs. Those who commit, order, assist, or have command responsibility for war crimes are subject to prosecution by the ICC or national courts.

The Optional Protocol to the Convention on the Rights of the Child on the Involvement of Children in Armed Conflict (“the Optional Protocol”), which Afghanistan ratified in 2003, states that non-state armed groups may not, under any circumstances, recruit persons under 18 or use them in hostilities. The Optional Protocol also places obligations on governments to “take all feasible measures to prevent such recruitment and use, including the adoption of legal measures necessary to prohibit and criminalize such practices.” Military forces also have an obligation to provide children with special respect and attention. The Convention on the Rights of the Child requires that governments “take all feasible measures to ensure protection and care of children who are affected by armed conflict.”