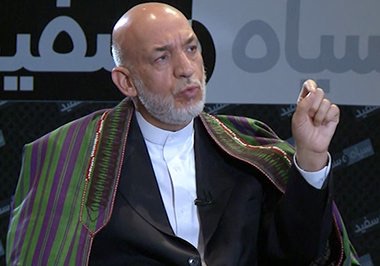 Hamid KarzaiThe former Afghan President Hamid Karzai has called on Taliban to renounce violence and join hands with the other countrymen in rebuilding the country if ‘they consider themselves sons of Afghanistan’.

In a statement released following a series of deadly attacks across the country since the group announced its spring offensive, Karzai said the war has been imposed on the Afghan nation and has roots outside the country.

Karzai further added that the main organizers of the war are living outside the country with full immunity and are plotting attacks to kill the Afghan people.

He did not elaborate further regarding the roots of Afghan war which falls outside the country but the Afghan officials have long been criticizing Pakistan for allowing the Afghan anti-government armed militants to use their soil as sanctuaries for conducting attacks in Afghanistan.

The Taliban group leadership as well as the notorious Haqqani terrorist network are openly operating in Pakistan by establishing councils in Peshawar and Quetta cities.

President Ghani earlier asked Pakistan to take actions against the Taliban group leaderships based in Peshawar and Quetta cities of Pakistan.

He made the call during a gathering in capital Kabul following the deadly attack, specifying the government’s stance towards the peace process and fight against the militant groups.

He warned to take the issue to the international organizations including the UN Security Council if Pakistan failed to take any action against the group in its soil.