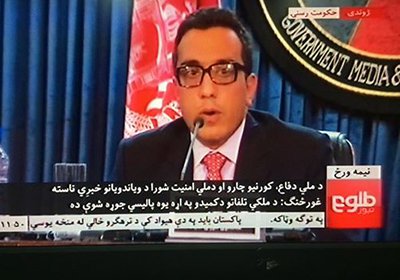 Tawab Ghorzang, a spokesman for the National Security Advisor on Thursday called on Taliban groups to use this opportunity to join the peace process.

This comes just a day after the Taliban announced the appointment of its new leader, Mullah Haibatullah Akhundzada. This announcement was followed by President Ashraf Ghani’s message to the group to join the peace talks process.

Speaking at a joint press conference in Kabul with security organization spokesmen, Ghorzang warned the Taliban that “if they not join the peace process they will face the same fate as their leaders.”

He said the Taliban’s morale has been affected following the death on Saturday of their former leader Mullah Akhtar Mohammad Mansour.

He said the Taliban’s “weakness will increase more in their leadership and on the battle field.”

His comments come just a day after the Taliban selected Haibatullah, first deputy to former leader Mullah Mansour, as successor.

‎‎Mansour was killed on Saturday in a U.S drone strike that targeted the car he was traveling in, in Baluchistan in Pakistan.

In the meantime, a spokesman for the Ministry of Defence (MoD) Dawlat Waziri said at the joint press conference that since Mullah Mansour’s death was announced the security forces have made considerable achievements on the battle fields.

Waziri said that “our intelligence report showing that the Taliban commander’s contact with their leader is reduced and they don’t know what to do,” adding that “some of the commanders accept the orders and some of them don’t.”

However, he said that security forces have increased their military operations in different parts of the country to clear insurgents.

Haibatullah is 56 years old and is from Panjwai district of Kandahar province. He reportedly now lives in Ghous Abad of Quetta city in Pakistan and was administrative deputy to Mullah Omar.

Haibatullah is also a religious scholar and is known for releasing Taliban statements to justify their presence in their war against the Afghan government and foreign troops in Afghanistan.

However it is said that the selection of Haibatullah as the Taliban leader was done without consultation with Mullah Rassoul, and experts said that conflict still remains among the Taliban.

Although the main reason for the killing of Mullah Mansour is said to have been because he was opposed to the peace process, it is not known what stance his successor will take in this regard.