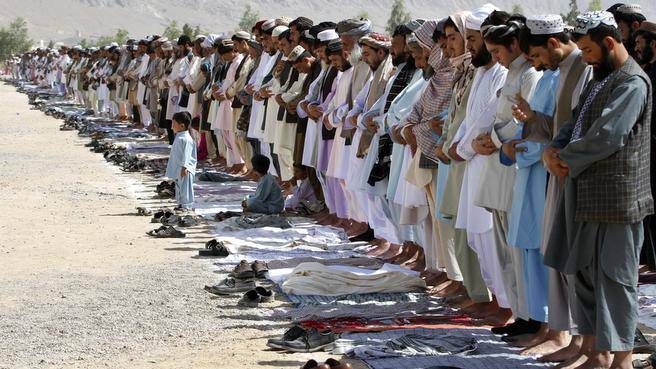 Afghans, like millions of Muslims around the world, on Monday started the three day Eid-ul-Adha celebrations.

Early Monday morning, Afghans flocked to the central mosques where they prayed for the security and prosperity of the war-torn country.

Religious scholars in their Eid messages urged the country’s political elite and ordinary people to work together to strengthen efforts for longstanding peace and security.

Afghan president Ashraf Ghani in his Eid speech expressed hope that the country will reach peace in the near future.

He said that a final peace agreement with Hizb-e-Islami, a powerful militant group, will be sealed soon.

“Peace is the hope of the Afghan nation and our nation has the will to achieve countrywide peace and harmony,” said Ghani.

Ghani appreciated the peace efforts by the Hizb-e-Islami delegation, saying that the peace deal will be finalized in the near future.

Local officials and religious scholars also stressed the need for more efforts to be done for peace.

“The message of Eid is a message of peace, I call on all people of my country to join hands and lets speed up the pace for peace,” said Mohammad Ayaz Niazi, a religious scholar in Kabul.

Herat governor Mohammad Asif Rahimi also called on the armed militants to denounce violence and to not harm their country on the order of strangers.

“I want to call on the opponents who still have the weapons of enemies of Islam and Afghanistan on their shoulders to lay down their arms if they claim to be a true Afghan,” said Rahimi.

“Government officials should no longer trust the opponents, people are very tired and they need security,” a resident of Herat said.

He said that a number of security officials were allegedly involved in corruption, and called for reforms to be put in place in the security organizations in order to overcome such issues.

“They (security officials) appear in television interviews, but in the winter they rest in war rooms while in summer under the air conditioners, but they leave the sons of the poor in the wars alone,” said Noor.

Referring to the twin suicide bombings in Balkh province this year, Noor vowed to expose the names of those who coordinated the attack.

“We are closely monitoring those who from the address of the police get respect and then transfer suicide bombers and explosives in vehicles with tinted windows. One day we will act against them. We have reports about them and know them but the issue is that we have no evidence against them,” said Noor.

“The Eid prayers ended peacefully, we hope that God helps us to reach sustainable peace,” said a resident of Balkh, Khalid.

“We hope that peace is restored all over Afghanistan with the help of the prayers of the people,” said another resident, Mirwais.

People in the Afghan capital Kabul also started Eid in a peaceful environment.

In the western province of Herat residents flocked to the mosques for Eid prayers.

In addition, Maidan Wardak officials called on Afghans to unite and foil the plots of the enemies

Also in Nangarhar, people from all walks of life participated at Eid services where they called on the warring factions to stop the ongoing battles and attacks and work for the development of the country.