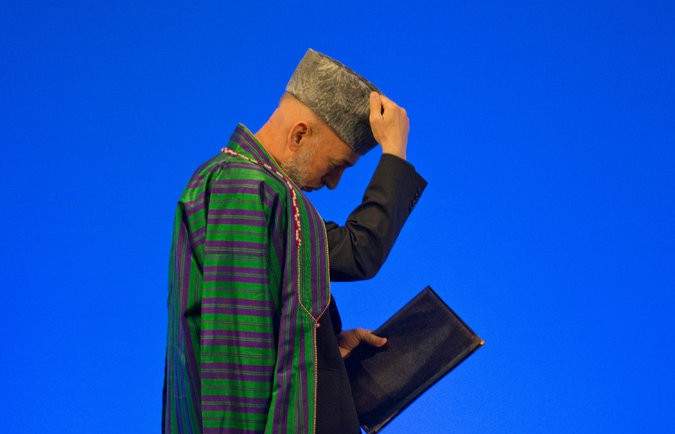 First, he is not considering a run for his old job in 2019. “No, no, sir, not at all,” he said in a rare interview with The New York Times on Sunday, the first he has given the newspaper’s Kabul bureau in seven years.

Second, he is not taking an active role in Afghan politics or governance, despite the steady stream of high-ranking visitors to his house that day, including sitting officials in President Ashraf Ghani’s government.

Third, he is not going to criticize Mr. Ghani’s coalition government even though, as he pointed out, it still has not appointed all of its ministers 10 months after inauguration. “It will not be proper for me to express my opinion publicly.”

“I have done my time,” he said. “I was president for 14 years. I want this country to get younger leaders, with a different vision.”

Still, the former president’s public profile has only been increasing at a time when Mr. Ghani’s government is both struggling and staking out almost polar-opposite stances from Mr. Karzai’s on several major issues. They include giving American commanders a freer hand on night raids and airstrikes, cooperating more closely with the Pakistani military, and marginalizing northern power brokers whom Mr. Karzai had studiously courted.

But in the interview, Mr. Karzai went to pains to insist that although he was closely following the issues, and certainly had things to say about them, he was not trying to run any government again.

That he granted the interview in the first place was something of a shift, after years of rejecting such requests. One of Mr. Karzai’s last acts in office was to approve an order ejecting a Times reporter, Matthew Rosenberg, from the country after he wrote an article about the possible creation of an interim government in the midst of the country’s deepening political crisis last summer. (One of Mr. Ghani’s first acts, conversely, was to allow Mr. Rosenberg to return.)

On Saturday, a new organization sponsored by Afghan news media owners, the Radio and Television Union, made Mr. Karzai its honorary chairman and awarded him the title “Architect of Freedom of Speech.” He agreed to the interview Sunday after one of his aides was asked about the honor and whether it clashed with his expulsion of Mr. Rosenberg.

Receiving Times reporters graciously and warmly at his office, near the presidential palace, Mr. Karzai got right to the point: “What is The New York Times up to now?”

When asked whether some might disagree with his being honored as a champion of the free press, he replied: “No way. It must be The New York Times itself that says that. Afghans know that the past 13 years were the best for freedom of the press. I don’t think any Afghan would deny it. For Afghan conditions, the best we could ever have in our history and better than many countries around the world.”

Mr. Karzai added that he was particularly proud of the advances the Afghan news media made during his years in office, and he defended the decision to expel the Times reporter.

“This was to protect Afghanistan’s sovereignty, to protect our democratic process and to protect the freedom of the press,” he said. On Sunday afternoon, the other visitors to Mr. Karzai’s modest office were a telling sampling of the country’s power brokers. They included Mullah Abdul Salam Zaeef, the most prominent of the former Taliban officials living in Kabul, and Rahim Wardak, who for many years was the defense minister in a country that has not had a permanent one for months now. Also visiting was a provincial council chairman; a former deputy foreign minister, Jawed Ludin; and Mr. Karzai’s former top administrative aide, Sadiq Mudaber.

“This is just the Afghan way of life,” Mr. Karzai said. “Some days we will just have lots of meetings, other days no meetings at all.”

Mr. Karzai’s last year in office was characterized by bitter disputes with American diplomats and military leaders over what he saw as their excessive use of night raids and airstrikes that inflicted many civilian casualties. The disputes culminated in Mr. Karzai’s 11th-hour refusal to sign a security agreement that would have allowed some American troops to remain past the end of the official NATO combat mission in 2014.

Mr. Ghani signed the security agreement as soon as he was inaugurated, and his military has since encouraged the use of night raids and played down the civilian casualties issue.

He was frustrated that American military leaders ignored his demands and continued the contentious raids, and said he was worried that such actions continue. He criticized an American drone strike in Khost Province on June 4; Afghan officials said the strike had killed 34 Taliban fighters, but some residents said it had also killed civilians.

He said his dispute with the United States — at one point he said the country had “betrayed Afghanistan” — had wrongly led people to view him as anti-American, which he said is not the case.

“The American people are great people,” he said. “I have immense respect for them.” He was grateful that the country has played host to many Afghans, including two of his brothers.

When the Communist regime imprisoned his father in Afghanistan, Mr. Karzai was a university student in India. “It was my brother in America, who worked in a restaurant day and night, who sent me a hundred dollars each month without the slightest delay for six years,” he said. “The English that I speak today is because of that money he sent.” He referred to his brother Mahmoud Karzai.

“I have tremendous respect for Americans, for the opportunity you give for the people to work hard and to benefit from and to profit from,” he continued. “That stands in sharp contrast to the night raids, to the bombardments, to imprisonment of Afghans by the U.S. government. So when I criticize, it is this aspect of the U.S. government. I have tremendous respect for the American people.”

He also said that he expected American officials to take a more active role in enabling peace talks with the Taliban, and had told the American ambassador that when they met recently.

“I need public statements from America that America is not trying to give partially or in any manner the control of Afghanistan to Pakistan or bring Pakistani influence to Afghanistan,” he said. He added that he had told the American ambassador, P. Michael McKinley, that “I would like to hear back from them on this.”

While Mr. Karzai insisted that he did not want to criticize Mr. Ghani’s government, he did say he was concerned about Mr. Ghani’s efforts to improve relations with Pakistan. Last month, Mr. Karzai openly denounced a memorandum of understanding signed between the two countries’ intelligence agencies, the Pakistani Inter-Services Intelligence directorate and the Afghan National Directorate of Security.

“We want the Afghan leadership to cancel the memorandum as soon as possible, and it should try to refrain signing of any pact that can be against national interests,” Mr. Karzai said in a statement sent to media outlets.

His former spokesman Aimal Faizi, who now describes himself as a liaison to Mr. Karzai, went further, characterizing Mr. Ghani’s action on the memorandum as “sleeping with the enemy.”

“I cannot support a deal with that organization,” Mr. Karzai said, referring to the Pakistani ISI, which was an early supporter of the Afghan Taliban and is still believed to exercise influence over some of its members. “I’m a pacifist. I don’t support warmongering.”

On his own aims, Mr. Karzai continued his pre-election assurances that he would not seek to be president again.

The Afghan Constitution specifies that the president cannot be elected “for more than two terms,” which some analysts have interpreted as meaning consecutive terms. In that reading, even though he was elected twice, he could stand again in 2019, when he would be 61.

Mr. Karzai insisted that would not happen. “Look,” he said, “if the country begins to need me back, that is not a good sign.”

Correction: June 22, 2015
An article on Tuesday about Hamid Karzai, the former Afghan president, whose public profile is increasing at the same time that the government of his successor, Ashraf Ghani, is struggling, misidentified the president who employed Sadiq Mudaber as his top administrative aide. Mr. Mudaber worked for Mr. Karzai, not for Mr. Ghani.