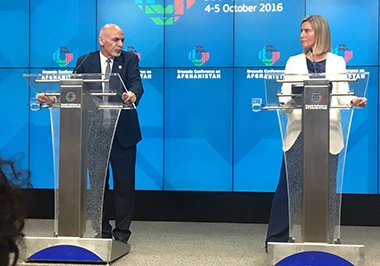 President Ashraf Ghani on Wednesday night extended his heartfelt gratitude to the international community for the $15.2 billion USD pledged for the years 2017 – 2020.

Addressing a joint press conference with EU foreign policy chief Federica Mogherini, Ghani said all plans prepared ahead of the two-day Brussels Summit on Afghanistan were drawn up carefully and based on relativity to the lives of the people of Afghanistan.

Ghani said the success of Afghanistan so far has been through team work but that going forward, it is essential that this dialogue continues and that it yields results.

He said that not only has Afghanistan secured financial and development support at Brussels but in the past three months the Afghan private sector has pledged to also invest $1.1 billion USD in the country.

Ghani said that following the pledges Wednesday, much work lies ahead in terms of turning this aid into viable projects and added that the promises made at Brussels means the people of Afghanistan get a new lease on life where prosperity can be generated.

He said Afghanistan is a work in progress but will become a stable and prosperous country in future.

On the issue of politics, Ghani said there is a need for productive politics in the region and that politics is about service – service to the people.

He said that at no time during the summit had Afghanistan been lectured on issues and challenges it is facing, because government is tackling its problems.

Ghani also raised the issue of return refugees and said thousands were crossing the border from Pakistan on a daily basis.

Based on this he said it was important that government address the issue as it was critical for stability.

In terms of moving forward, and using the aid that has been pledged, Ghani again reiterated his gratitude to the EU and outlined a number of areas where projects would be initiated.

One key sector was that of energy, he said adding that energy trade is critical for the future of Afghanistan.

He also said women’s empowerment programs will be tackled as will the key issue of harvesting the country’s water.

Roads and railway links were another area he mentioned and he said that even remote, poverty-stricken districts will be focused on.

Meanwhile, Mogherini said that the two-day summit had been extremely successful and of the $15.2 billion USD pledged, $5.6 billion USD came from EU member states.

She said the international community stood firmly at the side of the Afghan people and that fully support the National Unity Government (NUG).

She also stated that the EU would continue to stand by the security forces.

Mogherini did however point out that she has “clearly seen space for a common basis for regional support and peace”.

She ended by saying the EU will build on this new window of hope of regional consensus seen at Brussels these past two days.