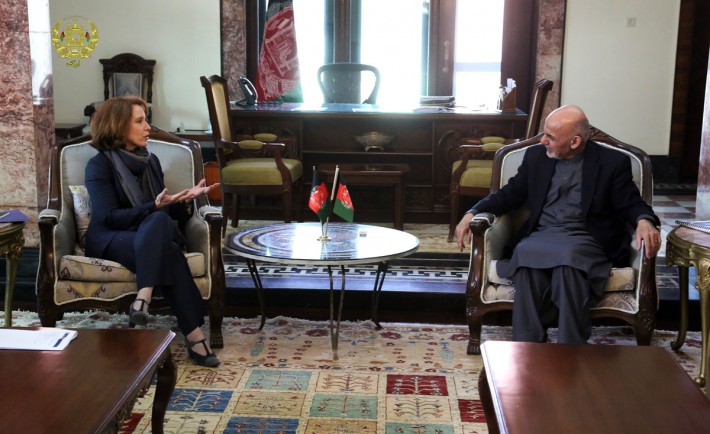 The Office of the President, ARG Palace, in a statement said “President of the Islamic Republic of Afghanistan Mohammad Ashraf Ghani met with Acting US Special Representative for Afghanistan and Pakistan Ms. Laura Miller this morning in Arg.”

The statement further added “In this meeting, Ms. Laura Miller discussed the situation in the region, Afghanistan and Pakistan ties and her work in this regard.”

Speaking about the war that is organized and imposed on Afghanistan from the outside, the President said that the foreign management of war in Afghanistan is clear to all and cannot be hidden anymore.

President Ghani further added that “Our people, the original victims of terrorism, do not have patience for terrorist attacks and wars organized and imposed on them from the outside.” He added that if this imposed war continues, we will not only continue to defend our country and people but also seek alternative ways and take action.

President Ghani underscored that Afghanistan has made considerable progress in the area of transit, and is freed from the constraints imposed by one transit route and neediness to a country.

He said the government of Afghanistan will continue its planned efforts to foster economic and commercial development, and regional cooperation.