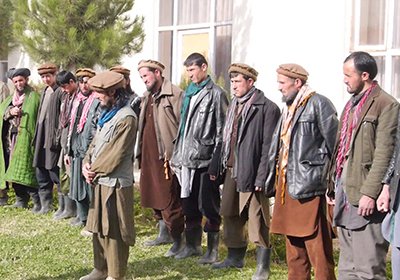 One of the Taliban’s military commanders in Badakhshan, Qari Mahrab, along with his 25 fighters, has joined the peace process.

Maharb said he was the intelligence commander for both local and foreign terrorists in Badakhshan.

According to him, 11 years ago he received military and religious training at terrorist centers in Pakistan. He then started carrying out anti-government and insurgency activities along with fellow fighters in Wardoj district of Badakhshan.

“Eleven years ago I got lessons in Pakistan and for seven years I have been with Taliban and I was on all Taliban’s battle frontlines,” Maharab said.

Mahrab also admits that he had a role in shooting and beheading a number of government forces.

Mahrab expressed his regrets for the deeds he committed and said that after this he will fight against the Taliban.

“In the past three months hundreds of armed Taliban have joined the peace process in Badakhshan and we are trying to conduct clearance operations,” Bigzad said.

At the moment Yamgan and Wardoj districts are under Taliban control but military experts believe that if government does not conduct clearance operations in the districts through winter, more districts could collapse during next year’s fighting season.