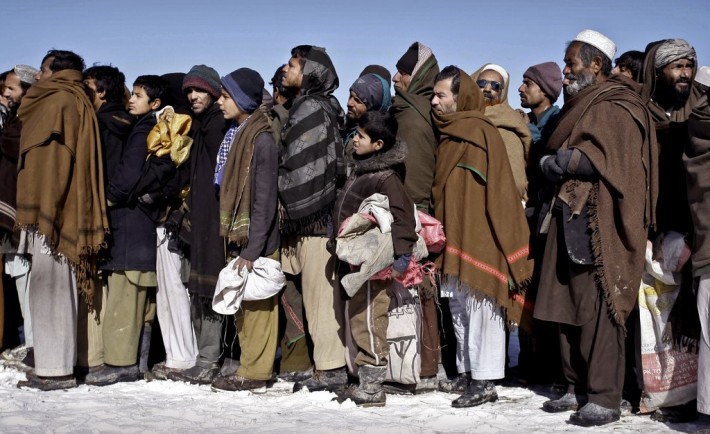 Caught in the middle of political tensions between Pakistan and Afghanistan are some two million Afghan refugees – registered and unregistered – who now face the option of either returning voluntarily or being deported from Pakistan.

And it couldn’t happen at a worse time.

Winter in Afghanistan can be bitterly cold. The country is also experiencing a spike in violence, with increased attacks from the Taliban and Islamic State of Iraq and the Levant (ISIL, also known as ISIS) fighters, leading to peak levels of civilian casualties and internal displacement as people flee the fighting.

“I’m scared to come here because there is no security,” says Medina Ghassen, 16, an Afghan refugee who was born in Pakistan, as she waits for a doctor to inspect her mother’s injured foot at a UNHCR clinic at the Kabul deregistration centre.

Her family has decided to return to Afghanistan voluntarily and is now being removed from the refugee registry. They are also being given cash and medical help by the United Nations before finding a home in Afghanistan.

“[Pakistani authorities] wouldn’t let us stay there. They made the situation very hard,” Ghassen, whose family is originally from Logar province, south of Kabul, explains.

“I was going to school, and I don’t think I can go to school here. It’s very dangerous,” she adds.

The family says it is not sure where they will stay after leaving the UNHCR centre, which is bustling with thousands of people who arrived overnight.

There is already a chill in the air, and staff have been scrambling to get enough blankets and heaters to keep people warm overnight. The deregistration of the refugees – a process that can take around 30 minutes for each person or family, depending on the crowds and the needs of the individuals – starts moving at a brisk pace shortly after 7am.

Each registered family member can receive around $400 – not enough to pay for rent and food for long.

Samiullah Rostam, 46, had lived in Peshawar, in the north of Pakistan, for 29 years. He found a wife there, and together, they had seven children. But after being detained five times in two months and having to pay fines – for either what he claims were fabricated infractions or as bribes – Rostam decided that he’d had enough, even though the UNHCR had registered him as a refugee.

“The [Pakistani] police really hassled us and tormented us … and I was seeing on TV police grabbing families – including women – by the arm and dragging them out of their homes to deport them, and I thought, ‘We can’t stay here,'” Rostam says, emphasising that while he was not deported, he felt he had no choice but to leave.

He rented a truck and returned with his family to Afghanistan in late October.

Now, their future is uncertain, he says. They are temporarily staying at the house of his brother-in-law, but he doesn’t know where they will go next.

“A lot of people [Afghans] I know didn’t even think about where they would be staying – they just left,” Rostam says.

Although the return to Afghanistan was voluntary for all those who are registered as refugees, the distinction between their situation and those who are unregistered and deported by the Pakistani authorities can be arbitrary.

Some families describe how some of their members were registered with the UNHCR but others were not, largely because they had been unable to complete the paperwork. Some had registered but failed to get their refugee cards renewed, leaving them ineligible for the UNHCR’s help on their return to Afghanistan. That was the case for several members of Tanadar Lodin’s family.

“We all had to leave together at the same time – the Pakistanis made things very difficult for us,” says Lodin, 40, who says he made a living in Peshawar as a street vendor.

Pakistan has repeatedly justified the move to deport registered and unregistered Afghans on the grounds of national security, accusing some Afghan refugees of posing a threat.

This has led to a crackdown on the two million Afghans living in the country, leaving them with little option but to return.

“We call these people ‘voluntary returnees’, but they really don’t have a choice – this is not voluntary,” says Ahmad Faheem Sattar, senior repatriation assistant the UNHCR’s deregistration centre in Kabul.

Not everyone returned in response to direct harassment. Mir Ahmad Khan and his family returned after 37 years because Pakistan started requiring visas and passports for Afghans earlier this year, which effectively cut them off from their family in Afghanistan.

“We have a lot of relatives on this side, and it became difficult for us to see each other,” 70-year-old Khan, who left Kabul during the Soviet invasion explains. “We didn’t want to leave, but we had no real choice.”

“After the political relationship between Pakistan and Afghanistan deteriorated, there has been additional pressure on Afghan refugees in Pakistan, and the number of returnees increased considerably,” says Hafiz Ahmad Miakhel, a spokesman for Afghanistan’s Ministry of Refugees and Returnees (MoRR).

There have been clashes at the Afghanistan-Pakistan border, which Pakistan has sealed and is hoping to secure with a fence, to which Afghanistan objects.

There are roughly a million registered Afghan refugees remaining in Pakistan, with another million or so unregistered there, although figures vary.

Those registered have until March 2017 to leave Pakistan. Those unregistered were required to return by November 15. That has not happened as it is impossible to process so many people at the border. Even among the registered, the UNHCR is taking appointments weeks in advance to avoid long lines outside its facilities in Pakistan.

According to MoRR data, as of October 15, a total of 191,946 Afghans who are not registered with the UNHCR have returned to Afghanistan. Of this, roughly 20,000 had been deported, or roughly 2,000 each month this year.

Projections by the International Organisation for Migration (IOM), the agency charged with helping unregistered refugees and deportees, suggest that by the end of the year, the number of undocumented returnees – those not registered with the UNHCR – will increase by 97,636.

According to the IOM, the returnees – voluntary and involuntary – come from all over Afghanistan, and will end up back in provinces where fighting has been rampant – from Helmand to Nangarhar.

UNHCR numbers indicate that roughly 350,000 registered Afghan refugees have already returned this year – making the total number of Afghans returning from Pakistan over half a million. Another 50,000 refugees are going to return to Afghanistan by the middle of December.

Afghanistan is accustomed to dealing with returnees with about seven million Afghans have returned from all over the world since the fall of the Taliban in 2001. Yet dealing with such high numbers of returnees – about 6,000 registered refugees a day – is posing a major challenge for the government.

“If they come back gradually, we can accommodate them,” says Miakhel.

“But if they come quickly, as they have, there will be too much pressure on the government to meet their needs,” he adds, emphasising the need for support from the international community.

The registered get help from the UNHCR in the form of money and healthcare, while the IOM helps roughly 20 to 30 percent of the unregistered. The Afghan government tries to cover the rest, giving $50 per person.

“It’s not much money, but that’s all the government can afford,” Miakhel explains, stressing that he doesn’t consider the situation to be a crisis.

Maya Ameratunga, director of UNHCR’s office in Kabul, disagrees. “It’s a crisis on both sides of the border,” she says.

“It’s a crisis of protection in Pakistan, in the sense of the level of harassment, intimidation and lack of support from host communities … but it’s also a crisis on this side.”

According to the MoRR, there are 61 camp sites being built to house returnees who have nowhere else to go. But at present, none of these sites is ready.

Ameratunga is worried that this will lead to a major socioeconomic crisis in Afghanistan.

Lodin, back in Afghanistan after 35 years, can’t see a clear future for his family of 20.