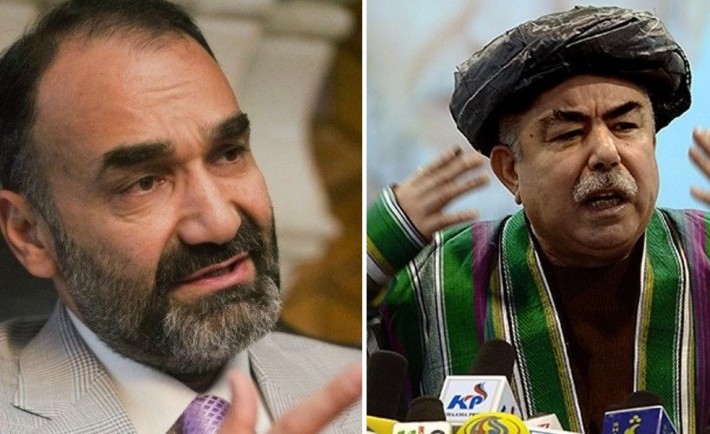 During an interview with BBC, Noor claimed that the government leadership in Kabul proposed to him to replace Gen. Dostum and take over the post of First Vice President.

However, he said he will never accept ‘donations’ and suggested that Gen. Dostum is the First Vice President, ignoring that he has a good or bad personality.

Noor also claimed that he has proposed to Kabul that Gen. Dostum’s successor should be an Uzbek Afghan, in case the First Vice President opts to resign.

The remarks by Noor came as he earlier said that he is no more counting on decision making capabilities of Chief Executive Abdullah Abdullah.

Noor further added that Abdullah has performed with weakness in the past two and half years and the reason behind direct talks between him and President Ghani is due to lack of proper presentation of Jamiat-e-Islami by Abdullah.

However, earlier he said he is ready to step down as the governor of Balkh province if the government takes practical steps for the commitments it has made.

He said his party is committed to support the central government as he called the current situation as ‘fragile’.

He said a draft agreement has also been prepared to be signed by him and the central government in a bid to establish a political understanding as he promised a comprehensive support to the government.

Noor said he shared with President Ghani their demands, specifically to have a prominent role in the political frameowk and in key decision makings, comprising major, strategic and national issues.

According to Noor, President Ghani has also offered demands to him and the supporters of Jamiat-e-Islami party, including the party’s support to peace process and the government’s foreign policies, being implemented via the ministry of foreign affairs.