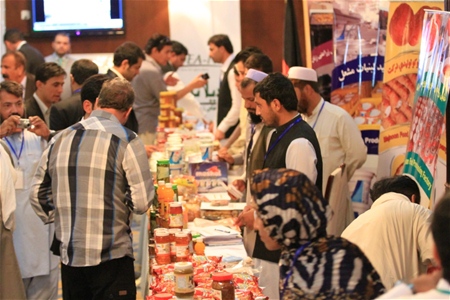 In the 4th exhibition of economic developments of Afghanistan expected to be held in Tajikistan in the purpose of expansion of commercial ties with the regional countries, over 40 productive companies of the country would exhibit their products in the neighboring country.

Enhancement of importance of domestic products and expansion of commercial ties between Afghanistan and central Asian nation was called the main motive behind the planned show.
The in-charge of public relation of chamber of commerce and industry, Hashem Rasouli says that the 4th exhibition of economic developments of Afghanistan would be held in August 7th to 10th in Dushanbe, the capital city of Tajikistan with cooperation of chambers of commerce and industry.
Speaking to media Rasuli called Tajikistan too important from several viewpoints:
Bilateral common cultures helped the standard of interests of our merchants towards the exchange of commercial goods to be increased with the neighboring country.
All products of Afghanistan would be displayed and we want to display the best products and commodities of Afghanistan to the people of the central Asian countries.
Rasuli added that so far, 40 productive companies of Afghanistan are registered with the exhibition and the figure is expected to be increased.

According to the chambers of commerce and industry, it was planned that at this exhibition, varieties of Afghan clothes, agricultural machineries, dried and fresh fruits, saffron, carpet, marble and semi-precious stones etc, to be displayed.

The in-charges of chambers of commerce and industry say that the third exhibition of economic development of Afghanistan was held in 1391 solar year at the side line of Shanghai conference or regional economic cooperation in Dushanbe city of Tajikistan that had considerable achievements.
At the same time, a number of experts in economic affairs of Afghanistan laying emphasize on importance of holding of such exhibitions and say that the incharges should be careful in selection of Afghan productive companies for this exhibition.
They say that experience, the quality of norm and standard that occurred in domestic products of Afghanistan necessitates that they should be introduced.
The number of exhibitions should be increased. We should introduce those companies they produce qualified commodities and should have experience till represent from Afghanistan as a good manner and focus the attention of foreign customers.
They should be encouraged for investment in Afghanistan.
Within recent years, numerous exhibitions are held by chambers of commerce and industry of Afghanistan in and in abroad and thousands people visited the Afghan products.
Some representatives of private sector of Afghanistan say that holding of regional and world exhibitions of Afghan products, caused the marketing for those products and pave the way for attraction of investment in Afghanistan.
But they lay emphasize that the government should implement its commitments in connection with support from private sector and attraction of domestic and foreign investments and also prepare the ground for development and growth of economy in the country.
A number of Afghan people welcome holding of such exhibitions and believe that the same cause good ties among regional countries and on the other, the Afghan products find its way to foreign markets that has special importance in development of economy of the country.

This is in a time that holding domestic and foreign exhibitions and   support of investors would strengthen good ground for investment in Afghanistan.