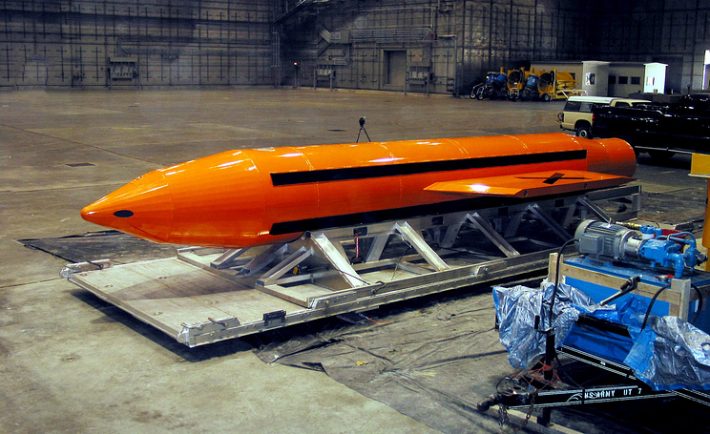 The U.S on Thursday dropped the largest non-nuclear bomb ever used in combat on a suspected Daesh installation, which included a series of caves, in Achin District in Nangarhar.

The U.S department of defense said this is the first time this bomb has been used in combat and that the plan had been in the works for months.

There were no immediate reports of civilian casualties.

An Afghan National Army (ANA) official from the eastern zone 201 Selab army corps, who did not want to be named, said they were not aware of the size of the bomb but that the U.S had been using different types of weapons against Daesh and other terrorists for the past few months.

“The strike was designed to minimize the risk to Afghan and U.S forces conducting clearing operations in the area while maximizing the destruction of ISIS-K (Daesh) fighters and facilities,” read the statement.

According to General John W. Nicholson, Commander, U.S Forces-Afghanistan, “as ISIS-K’s losses have mounted, they are using IEDs, bunkers and tunnels to thicken their defense.”

“This is the right munition to reduce these obstacles and maintain the momentum of our offensive against ISIS-K,” he said.

Resolute Support also stated that the U.S Forces “took every precaution to avoid civilian casualties with this strike. U.S Forces will continue offensive operations until ISIS-K is destroyed in Afghanistan.”