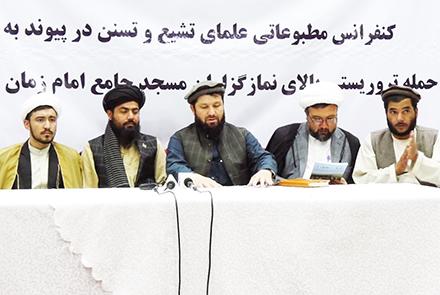 Prominent Shia and Sunni scholars on Wednesday said that no force, no country and no group will be able to sow the seeds of sectarianism among the people of Afghanistan.

The leading scholars, both Sunni and Shia, came together at a meeting in Kabul to discuss the issue.

They said that Shia and Sunni Muslims have lived peacefully together throughout Afghanistan’s history.

They called on the Afghan government to step up efforts to tackle the enemies who are working to destroy national unity.

The statement comes a few days after four suicide attackers linked to Daesh launched a deadly attack on a mosque in Kabul killing over 30 worshipers and wounding dozens more.

The scholars slammed these suicide attacks and said they were against Islamic principles and human values.

“The enemy, by committing suicide attacks and explosions, cannot destroy our values, because the Shias and Sunnis in Afghanistan are like brothers,” said one scholar Mohsin Danish.

Over the past year Taliban and Daesh insurgents have dramatically increased their attacks on specific targets in the country – a move the scholars believe is an attempt to divide Afghans and destroy unity among them.

“No country, no group and no organization will be able to split our Shia and Sunni, the enemy does not have the power to do so,” said religious scholar Hussaini Gharjistani.

“The enemies want to reach their objectives by creating division among us, we should not allow them to get this chance,” said religious scholar Mohammad Salim Hassani.

“As a Sunni youth, I am prepared to sacrifice my blood for the Shia,” said a religious scholar from Jawzjan Bahrudin Jawzjani.

Meanwhile scholars in the northern Balkh province have also denounced terrorism and sectarianism in all its forms and manifestations.

“Attacks on our mosques indicate the last power of enemies of Islam and they are trying to create sectarianism,” said another scholar Mawlavi Amruddin Ezidyar.

In addition, the secretary general of Hizb-e-Millat-e-Afghanistan party has called on security institutions to draw up a specific security plan to ensure security of mosques and religious sites in the country.

“A separate force consisting of police, the national directorate of security and the army must be formed, similar to Kabul Garrison, with special uniforms and good salaries to secure holy sites,” said Jaffarh Mahdawi, secretary general of Hizb-e-Millat-e-Afghanistan party.

This comes after insurgents carried out a number of deadly attacks on mosques including the attack on Baqir-ul-Olom mosque, Sakhi Shrine, Al-Zahra mosque and Imam Zaman mosque in Kabul and Jawadia mosque in Herat.

The Ministry of Hajj and Religious Affairs (MoHRA) also said this week that is has called on the National Security Council (NSC) to draw up a new security plan to ensure the security of mosques and other holy sites.