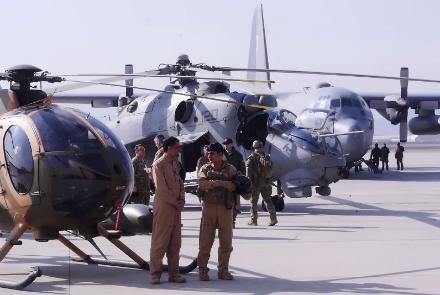 In a major sign of long-term support for Afghanistan, the United States and NATO alliance are moving to support the Afghan Air Force by investing billions of dollars in the nation’s Air Force.

Gen. Phillip A. Stewart, commander of Train, Advise, Assist Command said in an interview with TOLOnews on Sunday that $7 billion will be spent on the Afghan Air Force over the next four years.

“We expect the Afghan Air Force to be fully professional, sustainable and capable and independent and that’s our whole goal here,” he said.

Under the new aid package, the number of aircraft owned by the AAF will be doubled in the next four years.

“It takes a lot of time to build an air force from scratch, the Afghan Air Force is actually doing it incredibly fast and doing it under combat conditions, I don’t think that’s ever being done before when you an air force from scratch and in combat conditions, I think the international community has pitched in in an incredible manner, we have fourteen different nations that are part of the train, advise and assist mission,” said Stewart.

He said that one of the problems is that the Afghan Air Force personnel are growing during a war time. However the development of these forces is encouraging.

The complexity in the geography of the war in Afghanistan has been testing the war capabilities of the ground forces as insurgents continue their irregular and guerrilla warfare tactics in different parts of the country.

Meanwhile, a number of military experts have said that the Afghan government should also seek cooperation from foreign countries to boost the radar system of the country so that Afghan government can take control of its air space.

“We have a lot of shortages, we have a lot of weaknesses, we need to work on the issues, the system needs to work on it, we need a strong air force system to find the capability of controlling our air space,” said military expert Jabbar Qahraman.

Currently the Afghan Air Force is using A-29 Super Tucano and MD 530 aircrafts.