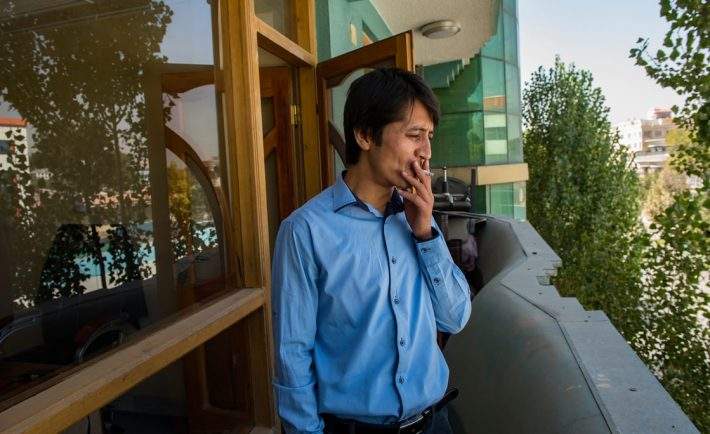 hen his newspaper dropped its third huge exclusive of the year, proving that Afghan government officials had tried to discriminate against ethnic minorities, Zaki Daryabi did not immediately worry about retaliation. His first concern was how to pay his staff.

Etilaat Roz, or Daily Information, punches above its weight. From a modest apartment office, Kabul’s smallest newspaper has rattled the establishment with a string of scoops, exposing government nepotism and corruption.

Eschewing the support from politicians and power brokers that most Afghan newspapers rely upon has ensured the paper editorial autonomy. But in a country with minuscule newspaper sales, the downside of such independence is a business that is permanently on the brink of bankruptcy.

“We never know if we’ll still be operating in three months,” said Daryabi, 29, the paper’s editor-in-chief.

Despite a tenfold budget increase over the past two years, the paper struggles to keep up with its own ambitions and sustain 20 staff including designers and a cook. When the Guardian visited, the work day had got off to a slow start because of a lengthy power cut. In front of blackened laptop screens, a handful of reporters swiped their smart phones for news.

“I have worked here for three years. Sometimes I wait four, five, six months to get paid,” said Esmatullah Soroush, a politics reporter. But he said he added that he wasn’t going anywhere. “Etilaat Roz belongs to us as well,” he said.

Its breakthrough investigation earlier this year revealed how the president, Ashraf Ghani, had allowed a conglomerate to buy government land at a 90% mark-down in return for financial support in the 2014 election. The article prompted parliament to halt the sale.

In a story that created widespread outrage, the paper later published a leaked document from the president’s office of administrative affairs in which an official encouraged promotion of Pashtuns at the expense of other ethnic groups.

Etilaat Roz is a torchbearer in the Afghan media revolution that has taken place since 2001, according to Lotfullah Najafizada, head of TOLOnews, Afghanistan’s largest 24-hour news station. “The quality of the work they do is something all readers benefit from. It helps Afghan media put more stuff forward. In the past, there was this tendency to wait for international media to put things forward first and then follow,” he said.

As Afghan media has grown so has solidarity against pressure from officials and militants, which protects small papers such as Etilaat Roz, Najafizada said. “The sense of unity in Afghan media is something I haven’t seen anywhere else in the world,” he said. “They know if they go after Etilaat Roz, they don’t just go after one paper.”

Daryabi was never in journalism for the money. Starting out writing for a weekly at university, he made $4 an article. He founded the paper with a $12,000 gift from two altruistic friends.

The newspaper began as an entertainment and business daily, which Daryabi hoped would bankroll his dreams of later publishing a newspaper dedicated to human rights. “There was no media publishing our generation’s ideas,” he said in between drags on a cigarette on the office balcony. “We wanted the new generation to become the new leaders of Afghanistan. So we needed our own media, our own voice.”

Within a year, the money had run out and, as if to rub it in, Daryabi’s mother took his stacks of unsold newspapers that clogged their house and sold them to bakeries to wrap bread in. “She got about 6,000 afghanis ($87) for newspapers it cost me $12,000 to make,” he laughed.

Through a deal with a printing press, he got off the ground again, this time focusing on politics. The circulation soon grew to 3,000 copies a day and the paper tapped into social media effectively. Its independence earned it a reputation as an outlet worth leaking to.

Now Daryabi and his staff revel in the kind of laborious journalism that unfolds, unglamorously, hunched over documents and spreadsheets. By examining dozens of ministries, embassies and consulates, Etilaat Roz recently documented how a small clique of strongmen install family members in powerful positions, debunking government claims of breaking with the country’s toxic dynastic politics.

After each scoop, the staff scours national media to see how it is received. There is little celebration. For now, he has to find the funds to keep going. “All of us decided: we will continue until we can’t,” he said.