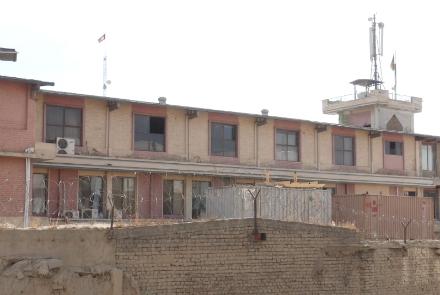 Journalists and other employees from Shamshad TV Network in Kabul said on Tuesday afternoon that despite being in a state of shock, following the attack on their compound earlier in the day, they went back on air as they were committed to their work and to promoting freedom of speech in war-torn Afghanistan.

At least one employee of the network was killed and 20 others wounded in a coordinated attack by militants on Tuesday morning.

Many families gathered outside Kabul hospitals searching for their relatives employed at the TV station. Among them was a woman who said her daughter worked in the dubbing department.

Many of those wounded during the attack had jumped from windows out of the three-storey building as they fled for safety.

“We were in the control room. We heard gunfire for at least 10 minutes. Then we went to another building and jumped out of the window,” said Ziaullah, a staff member.

“We were in the news room when we head the explosion. Everyone escaped from the windows,” said Khurshidi, a reporter.

Aziz, an employee of Shamshad Radio Station, said he helped many of his colleagues get out of the building.

“We saved our sisters first and then I jumped out of the window, but I have no idea what happened next,” he said.

“Security agencies did not tell us that we were under threat. We would have been informed if they sent us a letter,” Shamshad News Director Abed Ehsas said.

Shamshad TV station came under attack after an insurgent detonated explosives at the gate of the network’s compound on Tuesday morning – which opened the way for other gunmen to enter the facility.

Attackers had been wearing police uniforms and one of them managed to enter a building where at least 200 employees were working.

Shamshad stopped broadcasting for more than two hours during the attack but as soon as the attackers had been eliminated and the area cleared, they were back on air.

Security forces arrived at the scene a few minutes after the attack started, including the Crisis Response Unit. The insurgents however used rockets and hand grenades to keep the security forces away.

Initial findings of security agencies reveal that security force members, firefighters and medical official were also wounded in the attack.

“There were two attackers. They were gunned down. Four firefighters were slightly wounded due to a hand grenade explosion,” Interior Ministry spokesman Najib Danish said.

Many employees from the TV station escaped with the help of the National Olympic Committee’s officials whose office are next door to Shamshad TV.

Kabul has witnessed many deadly attacks in recent weeks. The most recent incident was an insurgent attack on Imam Zaman Mosque in the west of Kabul and another attack close to the Marshal Mohammad Qasim Fahim Military Academy where dozens of people were killed or wounded.
This was also not the first attack on media organizations in Afghanistan. Last year, Taliban targeted a bus carrying TOLO TV staff members. Seven were killed and 25 others were wounded.