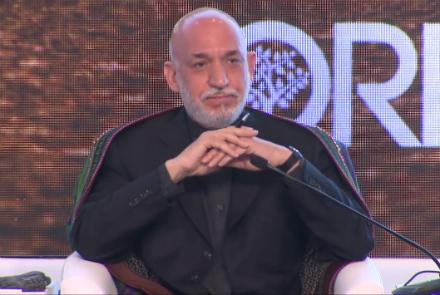 Former president Hamid Karzai has supported the military assistance of Russia to Pakistan, saying that Moscow can give weapons to Islamabad same as the United States is providing arms to Afghanistan’s neighboring country.

“There are ninety times more US weapons in Pakistan than Russian weapons in Pakistan,” Karzai said. “Shouldn’t we first correct the US part? Ninety percent… When they do that we will go to Russia and ask them to stop their will.”

The former president said the US has failed in Afghanistan war because it gives more importance to Pakistan compared with Afghanistan.

At the same event, Igor Morgulov deputy minister of foreign affairs of the Russian Federation, rejected Russia’s relations with the Taliban.

“How do you know this is Russian weaponry? I mean if it is AK, they are produced now almost everywhere. So, this no evidence again and we are speaking about those helicopters which bring foreign fighters to Afghanistan. We asked government in Kabul and we asked NATO commandment where these come from? Because we know that this is NATO and Afghan government who is controlling the air space of Afghanistan,” Morgulov said. “We have not yet received any substantial answer.”

The Russian diplomat said Russia does not have any influence over the Taliban.

About Russia’s pledge to facilitate talks between the Afghan government and the Taliban, he said: “That is a principle difference. We are proposing to provide conditions and to provide venue if needed for dialogue between the government in Kabul and the Taliban but there is no evidence whatsoever with regards to Russia’s assistance to Taliban. These are pure speculations; absolutely groundless.”