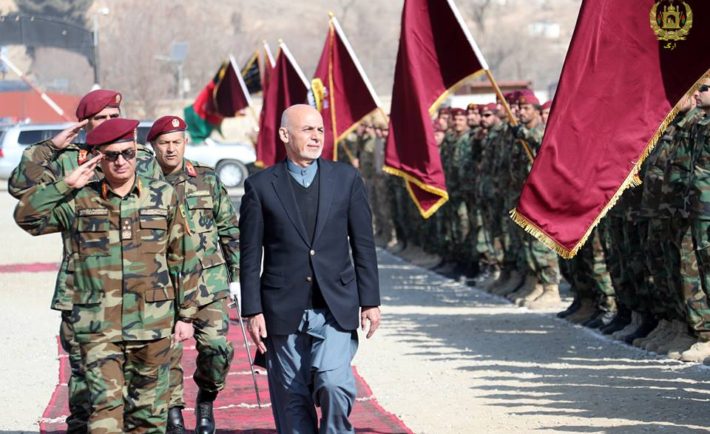 The Afghan President Mohammad Ashraf Ghani says the Afghan National Defense and Security Forces are committed to the national unity, insisting that petty politics does not hold any space within our forces.

President Ghani made the remarks during a visit to a compound of the Afghan Special Operations Forces in capital Kabul on Friday.

He said “We uphold the constitution. As guardian of the constitution ANDSF is committed to the national unity. Petty politics does not hold any space within our forces.”

In other parts of his speech, President Ghani hailed the Ministry of Defense for bringing its strategies and programs in line with the current situation that has resulted into the reduction of the Afghan armed forces casualties.

He said the ministry of defense has found the formula to conduct operations against the terror groups and the casualties rate of the security forces has dropped during the ongoing year, emphasizing that the casualties should further reduce in the next year.

According to President Ghani, the upcoming year should be a year initiatives to ensure the rule of law and governance across the country and the terror groups should be targeted and eliminate from every corner of the country in a bid to prevent them from establishing permanent bases for their operations.

He also pointed out towards the major national infrastructure projects and the role of the Afghan security forces saying the geographical situation of Afghanistan should be turned into a place for economic and investment opportunities.