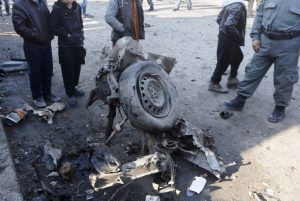 The Afghan security forces have killed a suicide bomber before he manage to carry out a deadly attack using a car bomb in southern Helmand province of Afghanistan.

The provincial government media office in a statement said a suicide bomber riding a Toyota Town Ace vehicle packed with explosives was identified before he carry out an attack in Marjah district.

The statement further added that the suicide bomber detonated his explosives after he was identified, leaving only himself dead.

The incident took place at around 11:30 am local time on Monday in the vicinity of Terikh Nawar area of Marjah district, the statement added.

Helmand is among the relatively volatile provinces in southern parts of the country where the Taliban insurgents are active in a number of its districts and often carry out insurgency activities.

In a similar incident, a suicide bomber was killed before he manage to carry out an attack using an armored Humvee type vehicle packed with explosives.

The incident took place in the vicinity of Marjah district amid ongoing operations as the local officials are saying that the Taliban insurgents are attempting to avenge their losses by carrying out suicide attacks.