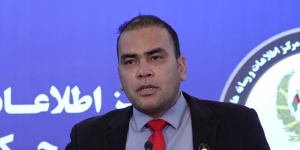 The Counter-Narcotics and Intoxicants Justice and Judicial Center has reported an increase in registered cases compared to the last year in the country.

The spokesman of Special Prosecution of Counter Narcotics and Intoxicants, Ahmad Khalid Mowahed has declared that in connection to 57 incidents 59 people arrested during the current month.

“At least two women and an Iranian citizen are also among the detainees and 16 cases are belong to the Hamed Karzai airport,” Muwahed said.

Muwahed noted that the penal code has been enforced in counter narcotics law and a number of the amendment has been added in the fifth and ninth chapters of this law.

“The maximum time of imprisonment was 20 years in the past and now it increased to 30 years with the enforcement of the penal code. The fine and charges also predicted from 5 to 120 thousand,” he added.

in late 2017, as a result of the new US president’s strategy for South Asia, there was a turnaround in the government’s counter-narcotics policy and, for the first time, included airstrikes against drug facilities that are linked to the insurgency, and operating without any legal limitations.