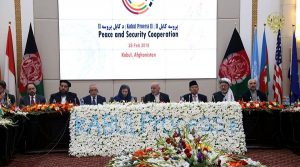 A number of political parties have reacted towards the remarks of President Ghani regarding peace talks with the Taliban at Kabul Process II conference.

Some of the political parties said recognition of the Taliban as a legitimate political group will not have an impact in the peace process, insisting that it will rise new issues.

“It is a mistake to officially recognize Taliban and their office as it will create more issues,” said Fazl Menallah Mumtaz, Spokesman of Hezb-e-Islami party. “The government should not let the Taliban political office in Qatar to be closed.”

Some parties, however, welcomed the government’s peace plan, saying it provides an opportunity for the Taliban to reach into a peaceful agreement.

“The president had a coherent statement, and the Taliban shouldn’t immediately reject it. People are tired of war. War is not a solution. Everything can be solved in negotiations,” said Sediq Patman, Deputy Head of New National Front party.

This comes as President Ghani in his remarks, proposed a ceasefire and a release of prisoners as part of a range of options including new elections, involving the militants, and revision of the constitution as part of a pact with the Taliban.

The president further said that the government is agreed with opening political office for the Taliban, issue passports for the group members of the Taliban, allow freedom of travel, and assist in removal of sanctions, allow access to media, and agree with the return of their family.