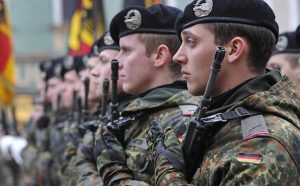 Germany will deploy hundreds more soldiers to Afghanistan as the cabinet of the government of Germany on Wednesday approved the deployment of more soldiers in the framework of the NATO-Resolute Support Mission.

The German defense minister Ursula Von Der Leyen has said the troop level in Afghanistan will be increased to 1300 soldiers.

According to reports, Germany is currently having more than 960 troops in Afghanistan who are mainly operating within the framework of the NATO train, advise, and assist mission in the northern parts of the country.

This comes as the NATO Secretary General Jens Stoltenberg said last month that the alliance is aiming to increase the number of the international forces in the framework of the train, advise, and assist mission to close to 16,000 during the year 2018.

NATO Secretary General Jens Stoltenberg told reporters in Brussels that “At least twenty-eight Allies and partners are increasing their troop contributions to our training mission in Afghanistan.”

Stoltenberg further added “We are aiming to have close to 16,000 personnel there this year. Up from around 13,000 last year.”

Stoltenberg had earlier said that the new international forces will train, advise, and assist the Afghan Special Operations forces.