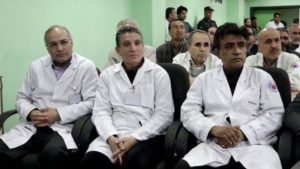 A number of doctors on Wednesday gathered in Kabul to protest against insecurities threatening their lives.

The doctors came together after one of their colleagues, Professor Assadullah Zarabi, was abducted by kidnappers and yet to be recovered.

The head of the Union urged the government officials who were also present at the gathering to make their efforts for the release of Dr. Zarabi.

“When I was informed about the kidnapping of Dr. Zarabi, I informed the interior minister, the National Directorate of Security (NDS) and other officials and they have tried their best so far,” Firozuddin Firoz, the minister of health said the protesters.

A senior police official promised that they are working tirelessly to decrease the level of crimes.

Yesterday, Afghanistan’s Chamber of Commerce and Industries (ACCI) and a number of investors voiced their concerns regarding the increase of kidnapping and crimes across the country.