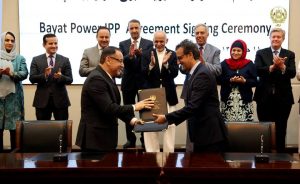 A contract was signed for the construction of gas power generation plant to be built with a total investment of $39 million.

The Office of the President, ARG Palace, said the contract was signed during a ceremony in the Presidential Palace on Saturday evening.

The statement further added that the plant will be built in Yatem Taq district of Jawzjan province with a total investment of $39 million.

The plant will have a capacity to produce 40 megawatts of electricity and the project will pave the way for the recruitment of thousands of people.

According to the officials, the project once completed, will provide electricity to around 30 thousand families and 100 factories on average basis.