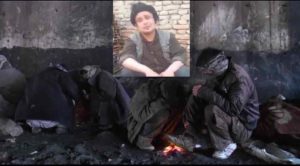 Narcotic Drug is said to be the third major challenge in front of the Afghan government after the on-going war and administrative corruption.

According to figures, about three million people including women and children are addicted to drugs in Afghanistan.

Officials in a drug treatment center on Kabul-Jalalabad road where around 1,000 homeless drug addicts are under treatment express concern on the rise of drug users in the country.

“968 patients are under treatment in our center,” Zalmay Noori, head of the center told Ariana News. “Poverty, war, illiteracy, unemployment, and lack of control on drug production and distribution are the main factors behind this tragedy.”

“The government has no attention to the youths; therefore, most of the youths who go through the centers fall back into drug use,” Parviz, one of the addicts at the center who have also memorized and recites the holy Qur’an told.

Hameed, another addict who, like many Afghans, have addicted in Iran said: “I was tired of my life and I wanted to kill myself. So, I started using drugs.”

On Monday, video of, Nastu Nadery, a well-known TV presenter, went viral on social media who is now using drugs.

Meanwhile, residents express concerns regarding the high number of addicted youths, urging the government to control the distribution of drugs in the country.

Afghanistan is one of the world’s biggest sources of opium. With the economy in ruins after decades of war and unable to provide jobs for young Afghans, demand for the temporary relief provided by drugs is high.