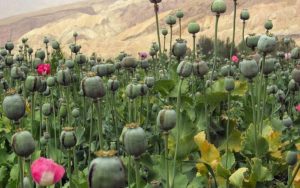 The Ministry of Counter-Narcotics (MoCN) admits its failure to eradicate poppy farms in the country, saying the ministry does not have the needed capability to prevent poppy cultivation.

“The eradication of poppy farms is impossible due to their high numbers. Terrorism and insecurity are also the main factors,” said Mahmoud Danishyar, the spokesman of MoCN.

According to MoCN statistics, poppy has been cultivated in nearly 328.000 hectares of lands in the country during the last year.

However, the Ministry of Interior (MoI) said poppy cultivation has decreased compared to the previous year.

“The 2700 operations conducted by the MoCN in all across the country shows a decrease in poppy cultivation,” said Najib Danish, spokesman of MoI.

A new research by the monitoring institutions indicates that poppy cultivation is increasing and the mostly the terrorist groups are benefiting from it.

“Fighting against narcotics is very hard in insecure and rural areas. We have mentioned in our research that poppy cultivation are mostly in areas under the control of opposition groups,” said Ahmad Seyar Yazdani, researcher.

Afghanistan is the world’s top producer of the poppy from which opium and heroin are produced.

Afghanistan is at a cross-roads; the country is emerging from more than twenty years of political and social unrest as the leading global producer of opium in a geographic region widely affected by drug use, particularly injection drug use, and blood-borne infections, including human immunodeficiency virus (HIV).