At least 113 Taliban insurgents have been killed in northern Afghanistan, an official confirmed on Monday.

Ghafoor Javid, spokesman for the Defense Ministry said that air and ground operations were conducted in Shirin-Tagab district of Faryab, as well as in Chahar-Bulak district of Balkh.

He added that the operations were conducted jointly by MoD and Resolute Support troops in which at least 113 Taliban insurgents were killed.

According to the statement, 11 militants have been arrested and nine more are wounded. 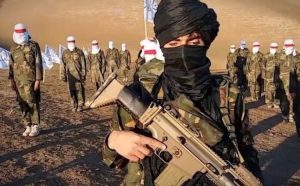 At least six Taliban insurgents including a commander of the Red Unit of the group were killed or wounded during a clash in northern Kunduz province of Afghanistan.

The 209th Shaheen Corps of the Afghan army in a statement said three Taliban insurgents including a commander of the Red Unit of the group were killed during the clash with the Afghan forces.

The statement further added that the Taliban commander killed during the clash has been identified as Mumtaz and at least three others were critically wounded.

According to the Shaheen Corps, the clash took place in the vicinity of Chel Cheragh Bagh Sherkat area of the province.