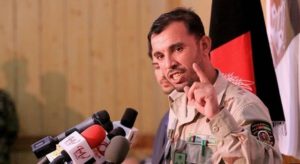 The provincial police chief, Gen. Abdul Raziq and the province’s intelligence chief Abdul Mohmin were killed on Thursday when a bodyguard opened fire following a meeting in the governor’s compound in the southern province of Kandahar, officials said.

According to the security officials, the governor of Kandahar, Gen. Zalmay Wesa and three Americans; a service member and two civilians’ workers were wounded in the shooting.

It was members of Wesa’s elite guard unit who turned their guns on their colleagues.

In a telephone interview, the spokesman for the Taliban in Afghanistan’s southern region, Qari Yousuf Ahmadi, said the Taliban carried out the attack.

He said Washington’s top general in Afghanistan, Gen. Scott Miller was the target and said Raziq, the governor and the intelligence chief were killed.

Officials said Razeq, Miller and the other officials were walking toward a landing zone as the helicopter taking the U.S. general’s party back to Kabul approached to land when the gunman, who was waiting outside, opened fire on the group.