The six documents released by Nabil include formal letters by Pakistani military and the military intelligence of the country, Inter Services Intelligence (ISI).

Nabil says the Haqqani network not only remained intact from Zarb-e-Azb operations but the Pakistani military shifted the network’s fighters, families, weapons and other equipment to safe places.

He said the Afghan and American intelligence agencies were undoubtedly aware of the move and National Directorate of Security has hundreds of classified documents of the Pakistani military regarding its support to Afghan militants.

A summary of the six letters released by Nabil is as following: 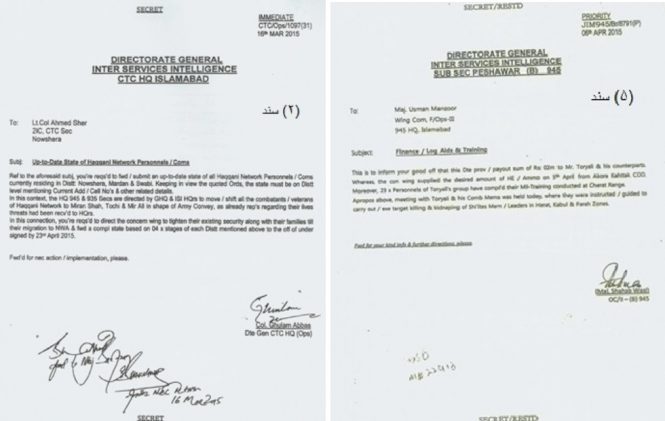 According to Nabil, the first classified document he has shared is regarding the relocation of Haqqani terrorist network commanders to Miranshah in North Waziristan as Inam Rabbani belonging to MI-422 in Peshawar formally informs Gen. Khalid the head of MI-22 regarding the move amid Zarb-e-Azb operations.

The second document is regarding the current condition of the Haqqani terrorist network as CTC in Islamabad sent a formal letter to CTC in Nowshera asking regarding the personnel and commanders of the network based in Nowshera, Mardan and Swabi.

The letter states that the central office of ISI has instructed the 945 and 935 departments to bring the Haqqani network militants to Miranshah, Tochi and Mir Ali under the escort of the military.

ISI has also instructed the relevant authorities to ensure the security of the families of the Haqqani network commanders until they reach Miranshah.

The third document is regarding a formal letter by MI in Islamabad to MI-422 regarding the arrangement of accommodation for two Taliban commanders identified as Hafiz Gulbahar and Mawlavi Hamdullah who were displaced due to operations and had shifted to Hayatabad in Peshawar. 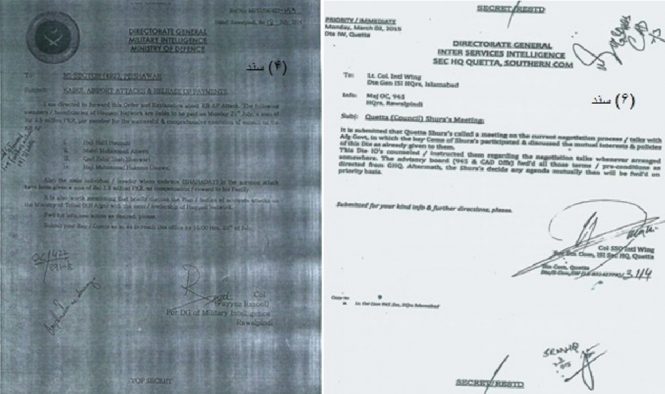 The fourth document is regarding an attack on military airport in Hamid Karzai International Airpot in Kabul.

The individuals involved in the attack have been identified as Haji Khalil Haqqani, Haji Hakim Woloswal, Qari Zahir Shah and Mawlavi Hakim.

The fifth document is regarding a formal letter issued by SI 945 in Khyber Pakhtunkhwa instructing the Haqqani terrorist network to kidnap or assassinate the Shi’ite leaders in Herat, Kabul and Farah province of Afghanistan.

The sixth document is regarding a formal letter issued by ISI office in Quetta to IW in Islamabad and 945 in Rawalpindi regarding the visit of ISI officers from Quetta council. The visit was aimed at discussing peace talks between Afghan government and the Taliban group and what should be the conditions of the group.